What is the Bertrand Paradox?

The Bertrand Paradox shows that if you don’t define probabilities well, then the mechanism that generates random variables will also not be well defined [1]. This leads to a paradox—a confusing, contradictory situation.

Bertrand’s paradox was one of the reasons classical probability fell out of favor at the turn of the 20th century. However, it really isn’t a paradox at all; if you’re careful to define your probability spaces, then the paradox doesn’t exist.

“If we choose at random two points on the surface of a sphere, what is the probability that the distance between them is less than 10?”

In fact, there are several ways to approach the problem. This leads to multiple solutions and probabilities.

To illustrate the paradox from a slightly different angle (pun intended), let’s take a look at an equilateral triangle drawn within a circle. 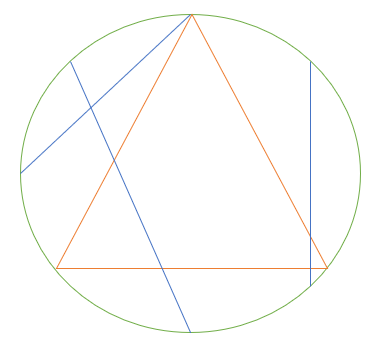 An equilateral triangle (orange) inscribed in a circle. Three chords are shown in blue.

What we want to know is, if we pick a random chord (a line segment drawn between two points on the circumference), what are the odds the chord is longer than one side of the triangle?


The solution seems simple enough. Pick a random point in the circle, use that as a midpoint for a chord: 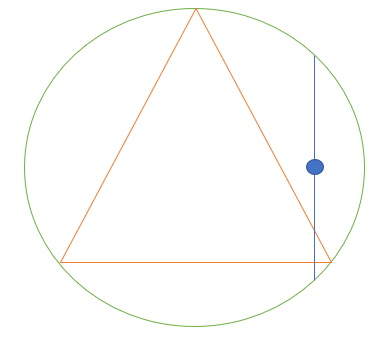 This way of choosing a random chord gives a probability of 0.25 [2]. But this obviously isn’t the only way to find a chord. We could choose a point on the perimeter to start with (that will give a probability of 2/3) or pick a random radius, then a random point (probability = ½).

All solutions are valid. However, they can’t all be valid at the same time—hence the paradox. The reason for the paradox is that the initial problem is ill-posed. We weren’t given any rules for choosing our chords, so that left the door open for multiple interpretations.