What is a Sensitive Test?

A highly sensitive test can be useful for ruling out a disease if a person has a negative result. For example, a negative result on a pap smear probably means the person does not have cervical cancer. The acronym widely used is SnNout (high Sensitivity, Negative result = rule out).
Back to Top

What is a Specific Test?

Tests with a high specificity (a high true negative rate) are most useful when the result is positive. A highly specific test can be useful for ruling in patients who have a certain disease. The acronym is SPin (high Specificity, rule in).

What qualifies as “high” sensitivity or specificity varies by the test. For example the cut-offs for Deep Vein Thrombosis and Pulmonary Embolism tests range from 200-500 ng/dL (Pregerson, 2016).
Back to Top 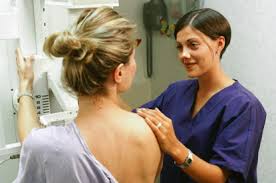 A mammogram is a high-sensitivity / low specificity test.

In general, high sensitivity tests have low specificity. In other words, they are good for catching actual cases of the disease but they also come with a fairly high rate of false positives. Mammograms are an example of a test that generally has a high sensitivity (about 70-80%) and low specificity. The sensitivity depends on tumor size, patient age and other factors. According to Cancer.gov, the test also comes with a fairly high false-positive rate: half of women who get annual mammograms each year for 10 years in the United States will experience a false-positive result.

An example of this type of test is the nitrate dipstick test used to test for urinary tract infections in hospitalized patients (e.g. 27% sensitive, 94% specific).
Back to Top

What is a Positive Predictive Value?

The positive predictive value (PPV) is the probability that a positive result in a hypothesis test means that there is a real effect. It is the probability of patients who have a positive test result actually having the disease. It’s commonly used in medical testing where a “positive” result means that you actually have the disease. For example, let’s say you were tested for a type of cancer and the test had a PPV of 15.2%. That means if your test came back positive, you’d have a 15.2% chance of actually having cancer. In other words, a positive test result doesn’t necessarily mean that you have a particular disease. For example, a positive test result on a mammogram may mean that your chances of having breast cancer (i.e. the positive predictive value) is only ten percent.

Positive predictive values can be calculated in several ways. Two of the most common are:

Sensitivity is the proportion of people with the disease who will have a positive test result.

The predictive value can be calculated from a 2×2 contingency table, like this one: 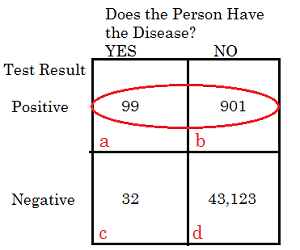 A good test will have lower numbers in cells b (false positive) and c (false negative). This makes sense, as a perfect test will only have numbers in the true positive and true negative locations. In reality though, perfect tests don’t exist. In addition, PPV is affected by the prevalence of the disease in the population. The more people that have the disease, the better the PPV at predicting odds. 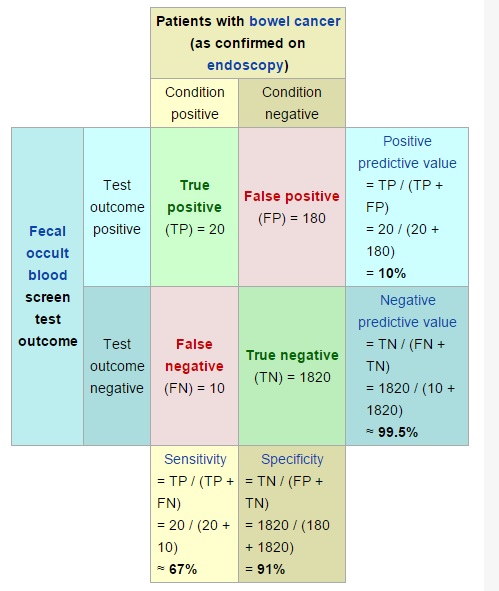 Positive Predictive Value vs. Sensitivity of a Test

The Positive Predictive Value definition is similar to the sensitivity of a test and the two are often confused. However, PPV is useful for the patient, while sensitivity is more useful for the physician. Positive predictive value will tell you the odds of you having a disease if you have a positive result. This can be useful in letting you know if you should panic or not. On the other hand, the sensitivity of a test is defined as the proportion of people with the disease who will have a positive result. This fact is very useful to physicians when deciding which test to use, but is of little value to you if you test positive.
Back to Top 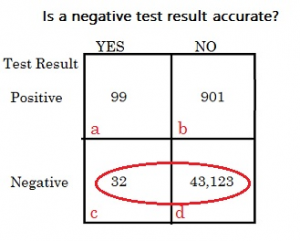