What is the Maxwell-Boltzmann distribution? 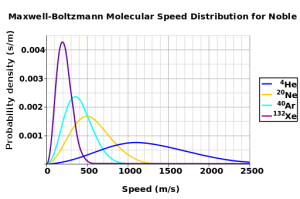 The distribution helps to explain why bonds break and new bonds form. In a given system, a particle must have a certain kinetic energy to collide with another particle and break/form a bond (called the activation energy). The activation energy can be represented by a point on the x-axis of the distribution; the area under the curve to the right of the activation energy point(labeled E on the graph) is the number of particles in the system that have the energy necessary for new bond formation. In general at higher temperatures, more particles have sufficient energy to react.