The Hidden Markov Model (HMM) is a relatively simple way to model sequential data. A hidden Markov model implies that the Markov Model underlying the data is hidden or unknown to you. More specifically, you only know observational data and not information about the states. In other words, there’s a specific type of model that produces the data (a Markov Model) but you don’t know what processes are producing it. You basically use your knowledge of Markov Models to make an educated guess about the model’s structure.

What is a Markov Model?

In order to uncover the Hidden Markov Model, you first have to understand what a Markov Model is in the first place. Here I’ll create a simple example using two items that are very familiar in probability: dice and bags of colored balls.

The model components, which you’ll use to create the random model, are:

“Black” and “Red” are the two states in this model (in other words, you can be black, or you can be red).
Now create the model by following these steps: 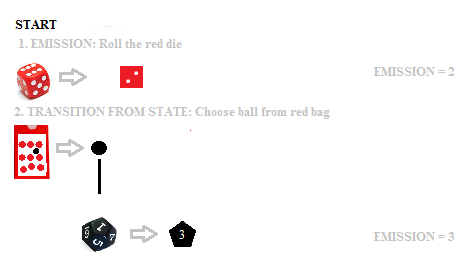 You can then repeat these steps to a certain number of emissions. For example, repeating this sequence of steps 10 times might give you the set {2,3,6,1,1,4,5,3,4,1}. The process of transitioning from one state to the next is called a Markov process.

Transitioning from red to black or black to red carries different probabilities as there are different numbers of black and red balls in the bags. The following diagram shows the probabilities for this particular model, which has two states (black and red):

λ = (A,B,π), is shorthand notation for an HMM. Other notation is used in Hidden Markov Models:

Three basic problems can be solved with Hidden Markov Models: