Censoring in a study is when there is incomplete information about a study participant, observation or value of a measurement. In clinical trials, it’s when the event doesn’t happen while the subject is being monitored or because they drop out of the trial.

Right censoring (sometimes called point censoring) happens when the subject leaves the study before it’s finished (“loss-to-follow-up”) or when the event you’re interested in doesn’t happen during the course of the study (“end-of-study”). 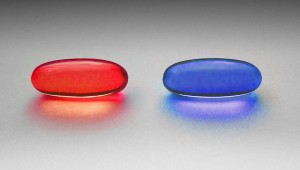 Placebos can affect dropout rates because they don’t offer relief from symptoms.

For example, in a 13-week clinical trial for pain relief, as many as 35% of patients failed to complete the study because of side effects from the medication or lack of relief from the placebo (AMSTAT). In general, drop outs from trials are very common: a 2010 report by the National Academy of Sciences states that patient dropout rates can sometimes exceed 30%.

If the event of interest (i.e. death, cure or other event) doesn’t happen during the course of study, the event is censored and given an event time of (t,∞) where t is the time of the end of the study.

According to Oxford University, right censoring can be broken down into two types:

Left censoring is when the subject was at risk for the event being studied before the start of the study. It’s not very common for this to be a factor. If it does happen, it’s usually not an issue for clinical trials as the starting point of the trial may be the occurrence of a particular treatment or the development of a disease.

When an entire study group has already experienced the event of interest, it’s called right truncating. For example, you might study groups of individuals who are admitted to the hospital post-stroke. If patients in the study are all high-risk, but haven’t yet experienced the event, then it’s called left truncating. Life insurance policies are examples of left-truncation; people enter into a policy and have the event of “death” at some point in time. Truncation is always deliberate and part of a study design, where censoring is random.

Next: Multiple Imputations to Deal with Missing Data.