What is Prime Notation?

In calculus, prime notation (also called Lagrange notation) is a type of notation for derivatives. The “prime” is a single tick mark (a “prime”) placed after the function symbol, f.
For example: The function f′(x) is read “f-prime of x.”

Lagrange (1736-1813) first introduced prime notation, but Lagrange prime notation isn’t the only way to symbolize a derivative. Another popular notation is Leibniz notation, which uses the capital Greek letter delta (Δ). Other notations that aren’t used as often include Newton’s Notation and Euler’s notation.

Prime notation because it uses the prime symbol (′), which are used to designate units and for other purposes. The prime symbol is commonly used, for example, to designate feet. Don’t confuse it with an apostrophe (′), as they are different characters. Some fonts make it very hard to discern though, and in for most intents and purposes, you can probably get away with just using an apostrophe (except when you’re publishing a paper or book).

Other Meanings for Prime Notation

The prime symbol(′) isn’t exclusively used in differential calculus. Another common use is in geometry, where it is used to denote two distinct, yet similar objects (e.g., vertices B and B’).

The term “Prime Notation” is also sometimes used to mean grouping identical prime numbers together to represent a number. For example, you could write the number 100 as 22 x 55. This is a completely different meaning from the prime notation discussed here.

Connection Between Prime Notation and Numbers

Prime notation and prime numbers are sometimes confused with each other. It’s unfortunate that they are named the same, because there is only a thread of a connection: Some authors occasionally use prime notation (N′)to refer to prime numbers, and that’s where the mathematical connection ends. However, they do share a common meaning for the word “prime”: first.

On the other hand, the name prime numbers came from Euclid, who defined prime numbers in The Elements (book 7, definition 1) as follows “A prime number is that which is [divisible] by an unit alone” (Prime Pages, 2021). He used the Greek word “Prôtos”, meaning “first in order of existence”; All numbers can be derived (through multiplication) from primes, which is why they are “First.”

The Prime Number Theorem helps to calculate probabilities of prime numbers in larger sets. It gives an approximate number of primes less than or equal to any positive real number x.

The theorem states that the “density” of prime numbers in the interval from 1 to x is approximately 1 / ln[x].

Consequence of the Prime Number Theorem

An interesting consequence of the prime number theorem is that the average distance between consecutive primes (in the vicinity of n) is the logarithm of n (Robbins, 2006). For example, let’s say you took the interval 900 to 1100 (centered at 1,000). There are 30 prime numbers in the interval 900 to 1100.
The total distances are given in parentheses between each pair: 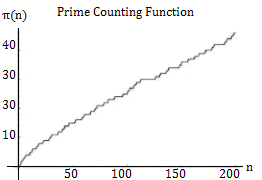 The function is denoted by π(x), which has nothing to do with the number π, ≈3.14. That notation originated with mathematician Edmund Landau in 1909 and is what Eric Weisstein calls “unfortunate”.

There isn’t one single function that can be called the counting function. In fact, there isn’t a simple arithmetic formula for determining π(n). All are relatively complex, and all are approximations (i.e. every one of them has a margins of error).

Two functions from the literature:

There are many, many more. Kotnik (2008) discusses many of them , along with the history of the prime counting function, in his paper The prime-counting function and its analytic approximations (PDF). 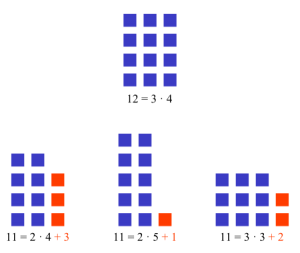