The Asch paradigm, in psychology, is a series of experiments on conformity run by Solomon Asch in the 1950s. These experiments tested the way individuals responded to group-think, and to what extent social pressure could cause a person to conform.

In the initial experiment, a test subject was asked simply to complete a vision test for a research project. They were then invited into a room with seven other “participants.” The other participants were in fact Asch’s collaborators, with scripted responses; in each run of the experiment there was only one ‘naïve participant’. 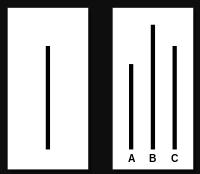 A set of two large cards was displayed; one with one line, the other with three. Each participant was asked aloud which line on the second card (A, B, or C) was most like the line on the first. In each case the true answer was obvious (in the example to the left, the true answer is C). The seven fake participants gave answers they had previously decided on, and the real participant was always asked the question last.

In eighteen trials, the seven fake participants gave a unanimous wrong answer 12 times. The aim of the study was to see how this environment would affect the naïve participant, and how far he would be willing to conform to others’ answers.

Asch ran this experiment 50 times over, gathering data. Afterwards, he interviewed the participants on their feelings. Asch also ran a control test, in which there were no ‘fake participants’ and only two naïve participants being asked the same questions in the same manner. The control he ran 37 times.

In the control group, fewer than 1 % of participants gave a wrong answer.

When interviewed, the participants gave different reasons for having made the decision to conform or not conform. Some acknowledged they had known the right answer all the time, but had not wanted to give it for fear of being thought peculiar. For others, the unanimous opinion of others had been enough to make them distrust their eyes; they figured everyone must be better at differentiating and so have the right answer.

Subsequent Experiments of the Asch Paradigm

In later years, Solomon Asch ran variations on the original Asch paradigm experiment to determine what factors would change an individual’s likelihood of yielding to conformity.

He also found that the number of ‘fake participants’ affected the conformity rate to a certain extent: one actor would cause only a very small amount of conformity, two would significantly increase it and three was enough to make the majority of naive participants doubt themselves. Beyond three, it did not seem to make much difference how many actors were in the room.