1. What is a Trigonometric Function?

A trigonometric function, also called a circular function, is a function of an angle.

Watch the video for an introduction to trigonometric functions, or read on below:

The cosine function (cos(x)) is a periodic function, which means it repeats itself at regular intervals. 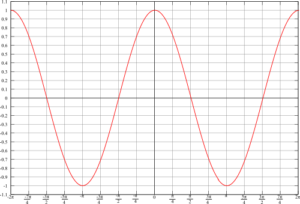 It is widely used in physics and geometry and was actually developed— along with the sine function— in the Medieval period. They were used in the Gupta period of Indian Astronomy, and have an important place in Islamic mathematical documents from the 9th century.

The cosine function abbreviates to cos, which seems to have originated in 16th-century mathematics.

One way of defining the cosine function is by means of a right triangle. Imagine drawing a right triangle with an angle of A. The cosine of A, abbreviated cos A, would be the ratio of the adjacent side to the hypotenuse. In the image below, it would be b/h. 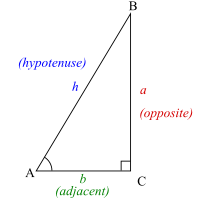 There is only one problem with defining the cosine function by means of a right triangle. It only works for an angle between θ and π/2 radians— between 0 and 90 degrees. There’s another way of defining cosine, however, which allows the angle to be any positive or negative real number.

Defining the Trigonometric Function with a Unit Circle

The image below shows a unit circle with six trigonometric functions marked on it. As you can see, cos θ can be defined as the x coordinate value of point A. 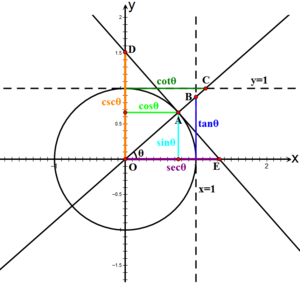 Notice that this definition is the same as our old definition for 0 ≤ θ ≤ π/2.

Also notice that since, for every point P(x,y) on the unit circle x2 + y2 = 1, we can write a Pythagorean identity for the sin and cos as well:

The cotangent function, cot(x), is a trigonometric function—a function of angles. It is a periodic function, repeating with a period π.

Notation
Although the usual notation is cot(x), the function is sometimes denoted as ctg(x).

As a formula, it can also be written as:

Graph of the Cotangent Function 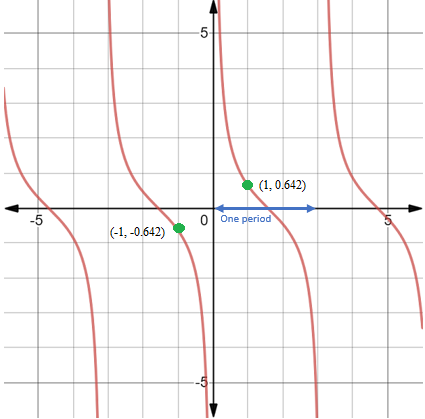 Some observations about the graph’s vertical tangents, domain and range and roots(zeros):

The haversine function (“half versed sine“) is a trigonometric function most commonly defined by:

What does the Haversine Function Do?

The haversine function calculates a circular distance, d, from two points on the outside of a sphere. 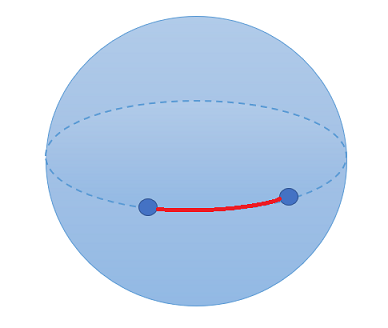 Extending that usage from spherical geometry to real life, it can used to find the distance of a journey (on a globe) using latitude and longitude.

The name “haversine” appears to have come from the words half + versine; The versine function, one of the less common trigonometric functions, is equal to two times the haversine.

The use of the haversine function was historically “…confined to seamen and professional [human] computers” (Hall, 1914). It was used both because of its brevity (a seafarer wanted the quickest calculations) and because of its accuracy (for hundreds of years, the Nautical Almanac was the seafarers bible and was renowned for its great accuracy).

The tangent function is a popular trigonometric function; It is a periodic function, which repeats every π periods.

As a formula, the tangent function is a quotient (division) of the sine and cosine functions:

Domain and Range
The tangent function is undefined anywhere the cosine function equals zero, because of the problem with division by zero. Most real numbers work, except for x = π2 + integer multiples of π. Therefore, these values are not in the domain.

The tangent function is unbounded, which means that the range goes to infinity (it has vertical tangents at every period). Written in notation, the range is:

Graph of the Tangent Function
The graph is an odd function, which has nothing to do with odd numbers: “odd” here means it is symmetric around the origin. 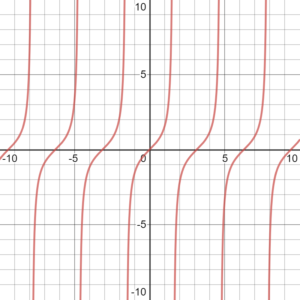 The graph of the tangent function fails the horizontal line test, so that tells us it isn’t a one-to-one function.

When working with the tangent function in calculus, you’ll usually restrict the domain, which means that you’ll use a boundary for your x-values. The graph below has a domain restricted from -1 to 1. 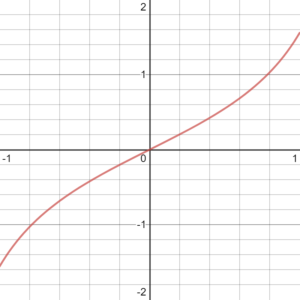 This graph resembles a “regular” function (instead of a wildly oscillating one), which makes it much easier to work with in calculus. For example, you can calculate an integral with the domain restricted like this, which wouldn’t be possible if the domain included the plethora of vertical asymptotes shown in the larger graph in the above section.

The derivative of tan(x) is sec2.
In addition to the above example (and proof), for a second worked example, see : Quotient Rule (Tan x).

What are Inverse Trigonometric Functions?


Other properties of the inverse sine function:

This function, denoted arccos x, is the inverse of the cosine function.

*Note that the superscript -1 is not an exponent, it’s merely a notation to denote the inverse. Therefore, it’s become common to use arccos instead of sin-1 to avoid confusion with exponents.

Graph of the Inverse Cosine Function

Why is the Domain Restricted to [-1, 1]?
It may seem odd that the inverse is only defined for a very narrow domain. This is because the cosine function is a many-to-one function, which means that more than one input gives the same output. This creates problems with creating inverses where the domain is infinity; it wouldn’t be clear which member of the range maps from which member of the domain.

Essentially, you’ll have an issue where each input maps to multiple outputs. If you remember the definition of a function, this violates the “one unique output” rule; The inverse cosine function would not be a function without this restricted domain.

The graph below shows what the inverse cosine would look like if graphed slightly outside of the allowed range.

What is the Inverse Secant Function

Domain and Range of the Inverse Secant Function

If you’re unfamiliar with the notation, the ∪ symbol is the “union“, which just tells you that the two parts together equal the entire domain. The parentheses indicate an open interval and the bracket a closed interval. Together, the mismatched ( and ] are called a Half Closed Interval (or Half Open).

Note on the Domain Restriction


Most texts restrict the domain to the above definition, but some authors disagree. The disagreement stems from the fact that the secant function is defined as sec(x) = 1 / cos(x). That function is undefined anywhere division by zero occurs: there is a vertical asymptote at every odd multiple of π / 2 (e.g. π/5, 3π). Therefore, in order to obtain a one-to-one function, it’s necessary to restrict the domain to [0, π/2) ∪ (π/2,π] because only one-to-one functions have inverse functions.

3. Derivative of a Trigonometric Function

Trig functions and their derivatives:

Using the Definition of a Derivative for a Trigonometric Function

Q. Find the derivative of a trigonometric function (sin x) using the definition of a derivative (in other words, prove that d/dx sin x = cos x:

Step 1: Insert the function sin x into the definition of a derivative:

Step 3: Use algebra to rewrite the formula in Step 2:

Tip: You can use the exact same technique to work out a proof for any trigonometric function. Start with the definition of a derivative and identify the trig functions that fit the bill.


The versine function (or versed sine) is a less common trigonometric function. It is equal to two times the haversine (the name “haversine” appears to have come from the words half + versine).


The function has a slope with a smooth transition at the beginning and end of the function (SPIE refers to the function as having a “smooth profile”):

The versine function is pretty much obsolete and is now considered mostly a “historic” function, rarely used except for the occasional mention in the literature. The function was once popular, especially in navigation, for its usefulness in finding certain line segments. However, even those references were mostly related to the more popular haversine function, which is defined in terms of the versine as:

It can also be defined differently (using a little algebra) in terms of the haversine:

Most modern uses of the function relate directly to the haversine, which is used in control theory (the study of the behavior of dynamical systems) and signal processing.

The function has also been defined as:

Or, the same function with different notation:

Double angle formulas are called “double” angle because they involve trigonometric functions of double angles like sin 2x or cos 2x. In other words, when we use the formula, we’re doubling the angle. These formulas allow you to rewrite a double angle expression like sin 2x and cos 2θ into an expression with a single angle. This means that instead of working with a complicated expression, you can transform it to a simpler one. As well as their ability to help us simplify and solve equations, they can verify identities and are needed for some aspects of calculus involving analytic geometry [1].

The double angle formula for sin is:

The cosine has three forms of the double angle formula. Each is derived from the Pythagorean theorem, so you only need to know one (the rest can be derived from the formula and the Pythagorean theorem) [2]. That said, one might suit the format of a particular problem than the others. For example, if you have a lot of sines in an equation, use the first form; Choose whichever one results in fewer calculations for you:

Step 1: Factor the expression:
The question asks us to factor, so let’s do that first to get it into a “double angle formula”- friendly format:

The solution is cos 2θ. 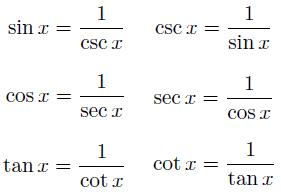 These identities are telling you that:

The first identity is really just a version of the Pythagorean theorem.

The above trigonometric identities will be used over and over again in your classes. They especially come in handy when it comes to figuring out derivatives or simplifying functions.

Other Types of Trigonometric Function

There are dozens of other possible types of trigonometric function, like arccosine, arctangent and arcsine, but the reality is you’ll rarely, or never use them. In the five semesters of calc I took in college, I think I used the rarer trigonometric functions only once or twice. You’ll probably never see them on a test (they might be assigned as a “tricky” trigonometric function homework problem). If they are on a test, your instructor will (or should) provide a list of lesser-known trigonometric identities. As long as you know (and can use) the above identities, you should be all set for your class.

Trigonometric Function and the Unit Circle


A unit circle has a radius of 1, centered at the origin (0, 0) of the Cartesian plane. Many trigonometric functions are defined in terms of the unit circle, including the sine function, cosine function and tangent function. That’s why trig functions are sometimes called “circular” functions.


Unit Circle with Radians and Degrees

The following unit circle is labeled with degrees (a complete rotation = 360°) and radians (one rotation = 2π radians), along with their respective coordinates on the Cartesian plane.


These coordinates are used to find the six common trigonometric values:

Any trigonometric function can be derived from these two ratios.