Watch the video for an overview of exponential functions.

What are Exponential Functions?

Exponential functions have the variable x in the power position.  For example, an exponential equation can be represented by:

Like other algebraic equations, we are still trying to find an unknown value of variable x. 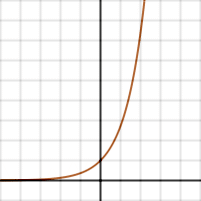 Most exponential graphs will have this same arc shape; There are some exceptions. For example, the graph of ex is nearly flat if you only look at the negative x-values:

Exponential functions are an example of continuous functions.

For example, we will take our exponential function from above, f(x) = bx, and use it to find table values for f(x) = 3x.

Step One: Create a table for x and f(x)

Step Three: Evaluate the function for each value of x. “Evaluate” means to plug the x-values into the equation and solve.

The points in our chart are then plotted on the x-axis and y-axis of our graph giving us the following: 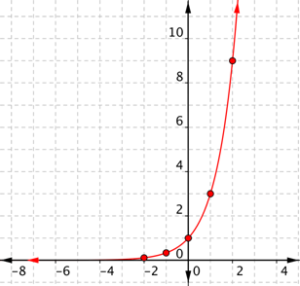 Exponential functions can also be applied in real world contexts to determine things like population growth and radioactive decay.  In these cases, the function will not be like above (f(x) = bx) but rather the formula must account for other factors.  For example, in the case of radioactive decay, the formula would look like this:

where A and k are positive real-valued constants.

Before diving further into the mathematics, let’s look at a graph of exponential growth. This plot assumes that A = 3 and k = 1. 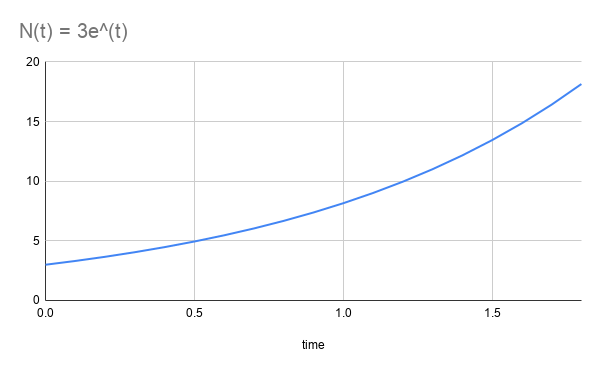 The function’s initial value at t = 0 is A = 3. The variable k is the growth constant. The larger the value of k, the faster the growth will occur.

The exponential behavior explored above is the solution to the differential equation below:

The differential equation states that exponential change in a population is directly proportional to its size. Initially, the small population (3 in the above graph) is growing at a relatively slow rate. However, as the population grows, the growth rate increases rapidly.

Exponential growth can be found in a range of natural phenomena, from the growth of bacterial populations to the speed of computer processors.

Problem 1: A colony of bacteria doubles its population every 4 hours. If the colony originally has ten bacteria, how large will the colony be 24 hours later?

Solution: Since the colony has an original population of 10, then A=10. Knowing that the population will be 20 four hours later, we can solve for the growth constant.

Then, the growth constant can be used to determine the population’s size one day later.

Amazingly, the original handful of bacteria will blossom into a colony of nearly a thousand in one day’s time. That’s the power of exponential growth.

Problem 2: A client deposits $100 in a savings account at the local bank. The account grows by 1% interest, compounded annually. What will the value of the account be after ten years?

Solution: The initial size of the account is $100, so A=100. The account’s value will be $101 after one year, due to the interest. Knowing this, we can calculate the growth constant.

where A and k are positive, real-valued constants.

The following graph shows exponential decay, where A = 5 and k = 1. 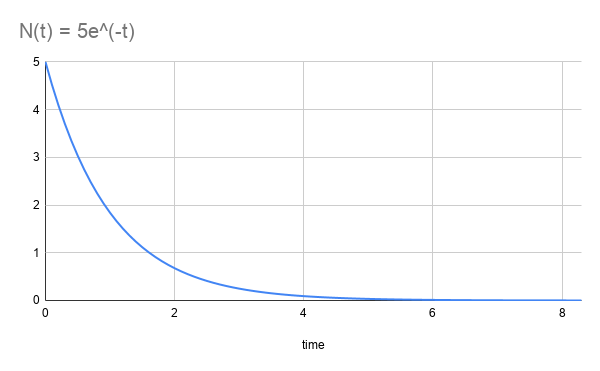 The function’s initial value at t = 0 is A = 5.  k is a variable that represents the decay constant. The larger the value of k, the faster the decay will happen.

Solution: To solve, we can use the equation for half-life.

The exponential behavior explored above is the solution to the differential equation:

The differential equation states that exponential change in a population is directly proportional to its size. For a large population, the decay is rapid. In contrast, as the population shrinks in size, the rate of decay becomes slower.

Radioactivity is the most common natural example of exponential decay. Over time, an unstable atom will eject particles from its nucleus. As these particles discharge, less radioactive material remains. Carbon dating, cancer therapies, and x-ray machines all involve radioactivity.

Problem 2: A wooden tool recovered from an archaeological site contains 65% of its original composition of carbon-14. Approximately how long ago was the wooden tool created?

Solution: Because carbon-14 decays due to radioactivity, we can use the exponential decay equation.

If A is a real number, then e(n) is called a real sequence. For example, if A is 3, then the first four terms in the sequence are: 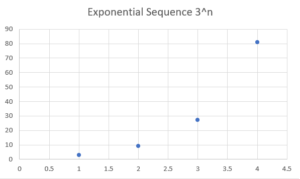 All exponential sequences are geometric sequences, with a common ratio equal to the base of the exponent (Pike, 2021).

Finding the nth Term of an Exponential Sequence

Finding a formula for an exponential sequence is quite involved and there isn’t a formula you can follow to find it. However, knowing that it behaves as a geometric sequence makes it a lot easier to find the nth term of the sequence. For example, consider the following question:

Example question: What is the next term in this exponential sequence?

Base Numbers in Exponential Functions

The term “base number” in calculus usually refers to the number found in exponential functions, which have the form


f(x) = ax
The “a” is the above expression is the base number, so-called because it’s a solid base(foundation) for the rest of the expression—like the hovering exponent (x) to the right. The base can be any positive real number not equal to 1.

Logarithmic functions are also defined with respect to a “base”, which is any positive number. However, the “base” in a logarithm isn’t usually called a base number— just a “base”. 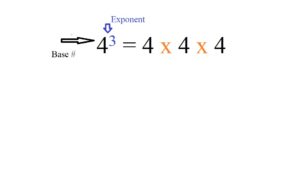 The term “Base number” also refers to the values in a number system.  More specifically, the base tells you how many digits are in the system. For example, the base 10 system has 10 digits from 0 to 9.

It has one very special property: it is the one and only mathematical function that is equal to its own derivative (see: Derivative of ex). Looking at this graphically, this means that the slope of a tangent line to the curve at any point is equal to the height of the curve at that point.

The graph of ex is a reflection of ln(x) over the line y = x.

These two functions are inverses of each other:

Properties of the Natural Exponential Function

ex has some handy properties that make it very easy to manipulate algebraically. Because of the laws of exponents, we know that:

Why Use Natural Exponential Functions?

We don’t just use the natural exponential function because it makes algebra become easy, though. It’s also an accurate model of many processes in our world, including the growth and decay of biological systems and what happens to the money when it is compounded.


The term “nth” just means an order: 1st, 2nd, 3rd, and so on. It is just shorthand notation for the entire group of endless possibilities.

The nth root function can be written in two ways:

The second format—x1 / n— is what you’ll want to put into a graphing program or calculator. Some calculators do have nth root functions, like the Casio FX-9750G (press SHIFT and

The formal definition is:

The nth root function, n√(x) is defined for any positive integer n. However, there is an exception: if you’re working with imaginary numbers, you can use negative values. For example, (-1)½ = ± i, where i is an imaginary number.

Properties of the nth root Function

Some graphing calculators (most notably, the TI-89) have an exponential regression features, which allows you to take a set of data and see whether any exponential functions would be a good fit.

Exponential regression fits an exponential function to your data. As an example, let’s say you have the following data:

You might notice that the data decreases sharply, so a decreasing exponential function might be a good fit.

Step 1: Make a scatter plot. Watch the first minute of this video if you don’t know how to create one. This step confirms that the data roughly fits an exponential model. If your data doesn’t fit the model, stop here. You could (theoretically) continue, but your model will be practically useless. Find another model that better fits your data.

Step 5: Move the cursor to “Calculation Type”, then press the right-cursor key and choose “4:ExpReg”.

Step 7: Enter the location of your y-values into the “y” box.

That’s it! A window will appear with a and b . These go into the regression equation y = abx. The same equation will also show in the y1= line of the Y= screen.

Tip: Y-values must be greater than zero in order for regression to work prroperly.
Lost your guidebook? You can download a new one from the TI website. The Titanium Guidebook can be found on this page.