Calculus Problem solving is a wide topic covering hundreds of possibilities from finding lengths and areas to calculating rates of change and continuity of functions.

Click on a topic to go to that article:

The tautochrone problem addresses finding a curve down which a mass placed anywhere on the curve will reach the bottom in the same amount time, assuming uniform gravity. The solution, discovered in May 1697 by at least five different mathematicians, is an (inverted) cycloid [1]. A similar problem is the brachistochrone problem, which asks the question: What is the curve of fastest descent? The solution is also a cycloid.

History of the Tautochrone Problem

The tautochrone problem goes back to the time of Galileo (1564-1642), who discovered that large, high-speed pendulum swings or small, low-speed swings take about the same length of time. He later realized he could use the principle to construct a clock, but he lacked the mechanical skills needed to actually build one. Later on, Christiaan Huygens (1629-1695) constructed the first working model of the cycloidal pendulum. Several of his pendulum clocks to determine longitude at sea were built and tested in 1662. In his book, Horologium Oscillatorium, Huygens proved that the cycloid is tautochronous [3], which means “occupies the same time”.

During his study of pendulums, Huygens discovered that a ball rolling back and forth on an inverted cycloid completes a full “swing” in exactly the same amount of time. He solved the tautochrone problem without calculus, using Euclidean geometry [4]. In addition to the cycloid, there are an infinite number of tautochrone curves which are solutions to the problem [5]. One way to solve the problem is with Laplace Transforms [6].

What is the Integral Transform?

The integral transform is a way to solve challenging problems by transforming coordinates into another space, via integration, where the problem is easier to solve. The solution is then transformed back into the original coordinates with an inverse transform. 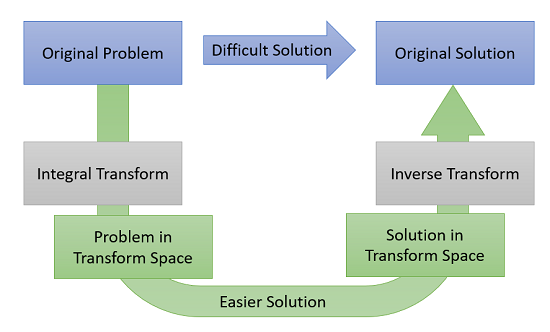 Other types of commonly used transformations include:

Which one you use is usually determined by the boundary condition. For example, the ideal transformation a problem defined on a semi-infinite domain (0, ∞) in space with a Dirichlet boundary condition is the Fourier sine transform.

More formally, the integral transform with integral kernel K is a mapping that takes function f(t) to a function f(x) with the rule [3]:

Where a and b are real numbers (including infinity and negative infinity).

The path of a baseball hit by a player is called a parabola. Its graph can be represented in calculus using a pair of parametric functions with time as the dimension. These functions depend on several variables, including:

Wind speed is another factor that will affect the path of the baseball, but this factor forms complex equations and is not dealt with in these simplified parametric equations.

Path of a baseball: Steps

Step 1: Define the variables used in both the parametric equations.

Step 2: Write an equation for the horizontal motion of the baseball as a function of time:

Step 3: Write an equation to describe the vertical motion of the baseball as a function of time:

The pair of x(t) and y(t) equations are the required parametric equations that describe the path of the baseball in calculus.