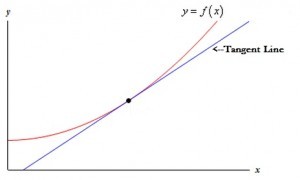 A tangent line is a line that touches a graph at only one point and is practically parallel to the graph at that point. It is the same as the instantaneous rate of change or the derivative . 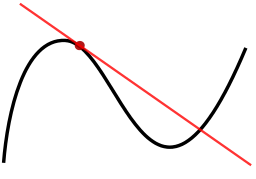 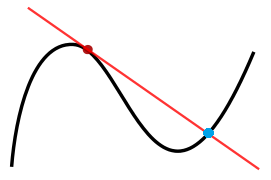 
A horizontal tangent line is parallel to the x-axis and shows where a function has a slope of zero. You can find these lines either by looking at a graph (which usually gives an approximation) or by setting an equation to zero to find maximums and minimums.


How to Find Horizontal Tangent Lines

Look for places on a graph where the slope (a.k.a. the derivative) is zero. In other words, look for where the slope is horizontal or flat and parallel to the x-axis. If you have a trace function on your calculator, you should be able to pinpoint the exact coordinates. However, if you have a graph on paper or without that “trace” ability, the position of the horizontal tangent line will usually be an estimate. For example, the graph below appears to have a horizontal tangent at y = 3 (at the graph’s low point). However, the tangent line is actually at y = 3.025: 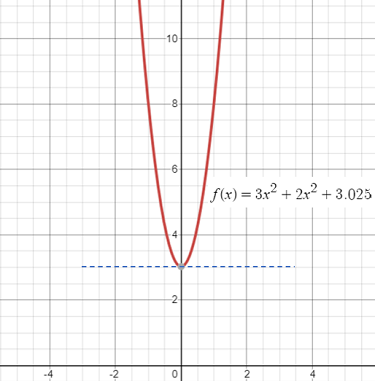 The point where the tangent line touches the graph exactly once is called the point of tangency. 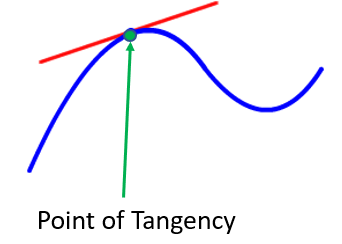 If the tangent line is extended, it may hit the function at another point on the graph, but we’re not concerned about that. What’s important is that the tangent line only skims the graph once at the point of tangency. 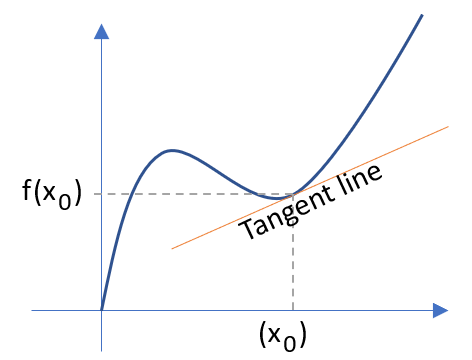 The formula might look complicated, but all you need to do is plug in numbers from a question.

Step 2: Find the function value shown in the top right of the numerator. In other words, we need to find f(0) by plugging in 0 into f(x) = |x|, (which was the function given in the question):

Step 3: Replace f(0) in the formula with the solution from Step 2:

Step 5: Insert your value from Step 4 into the formula:

Step 6: Approach the limit from the right:

Step 7: Approach the limit from the left:

Step 8: Compare Steps 6 and 7. The two-sided limit doesn’t exist because the values are different. In other words, there is not tangent line at to |x| at zero.

Example problem: Find the tangent line at a point for f(x) = x2.

Note: If you have gone further into calculus, you will recognize the method used here as taking the derivative of the graph. If you know how to take derivatives of a function, you can skip ahead to the asterisked point (*) of step 2.

Step 1: Set up the limit formula. Substituting in the formula x2:

Step 2: Use algebra to solve the limit formula.

This gives the slope of any tangent line on the graph.

Step 3: Substitute in an x value to solve for the tangent line at the specific point.

What is Newton’s Method?

Newton’s method (also called the Newton–Raphson method) is a way to find x-intercepts (roots) of functions. In other words, you want to know where the function crosses the x-axis. The method works well when you can’t use other methods to find zeros of functions, usually because you just don’t have all the information you need to use easier methods. While Newton’s method might look complex, all you’re actually doing is finding a tangent line, then another tangent line, and repeat, until you think you’re close enough to the actual solution.

The general form of Newton’s Method is:

What’s basically happening with this equation is each iteration (subsequent calculation) takes you closer and closer to the true solution, as the following image shows. The true solution is marked in red. The blue line is the tangent line for x0 (Guess 1) and the green line is the tangent line for the second iteration. Eventually, your answers will get closer and closer (converge) to the red x-value.

Step 2: Take a guess for the actual x-intercept and insert that guess into your function from Step 1. We’re given the interval [0, 2] in the question, so a good guess to start with is 1 (because it’s in the middle of the interval).

Step 3: Evaluate the function from Step 2 using any calculator (I just used the Google calculator):

Warning: A downside to Newton’s method; it will not work if you pick a point where the tangent line is horizontal.

The image below shows where these pieces fit on a graph.

At first, you may find it a little challenging to see how all of the pieces fit together. But you don’t need to fully understand what they all mean to solve a differential approximation question: the solutions are quite formulaic, and all you really need to know is a couple of different substitutions.
For example, notice on the graph that Δx and dx are of equal lengths. That means you can substitute one expression for the other. The following expressions are also interchangeable:
f(x + Δx) = f(x) + Δy = f(x) + f′(x)Δx.

The next example should make it clear how these substitutions work.

Step 3: Find the first derivative for the function. For this example, differentiate the function with the power rule (because you can rewrite √(x) as x½). This gives: