What are Bernoulli Trials?

A coin toss is a Bernoulli trial with a probability of heads = 0.5.

A Bernoulli trial is an experiment with two possible outcomes: Success or Failure. “Success” in one of these trials means that you’re getting the result you’re measuring. For example:

Note that “Success” doesn’t have the traditional meaning of triumph or prosperity. In the context of Bernoulli trials, it’s merely a way of counting the result you’re interested in. For example, you might want to know how many students get the last question on a test wrong. As you’re measuring the number of incorrect answers, the “Success” is answered incorrectly and a “Failure” is answered correctly. Of course, this might get confusing so there’s nothing stopping you tweaking your hypothesis so that you’re measuring the number of correct answers instead of incorrect ones.

Bernoulli trials are a special case of i.i.d. trials; Trials are i.i.d. if all the random variables in the trials have the same probability distribution.

The three assumptions for Bernoulli trials are:

What is Bernoulli Sampling?

Bernoulli sampling is an equal probability, without replacement sampling design. In this method, independent Bernoulli trials on population members determines which members become part of a sample. All members have an equal chance of being part of the sample. The sample sizes in Bernoulli sampling are not fixed, because each member is considered separately for the sample. The method was first introduced by statistician Leo Goodman in 1949, as “binomial sampling”.

Example of Bernoulli Sampling: A researcher has a list of 1,000 candidates for a clinical trials. He wants to get an overview of the candidates and so decides to take a Bernoulli sample to narrow the field. For each candidate, he tosses a die: if it’s a 1, the candidate goes into a pile for further analysis. If it’s any other number, it goes into another pile that isn’t looked at. The EV for the sample size is 1/6 * 1,000 = 167.

An advantage to Bernoulli sampling is that it is one of the simplest types of sampling methods. One disadvantage is that it’s not known how large the sample is at the outset.

In R: S.BE(N, prob) will choose a sample from population of size N with a probability of prob. For example (UPenn):

A Bernoulli Distribution is the probability an experiment produces a particular outcome. It is a binomial distribution with a single event (n = 1).

A die roll can have a Bernoulli distribution.

There are two variables in a Bernoulli Distribution: n and p. 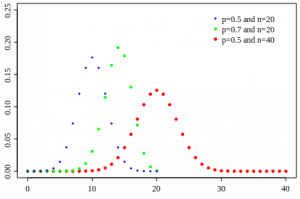 A Bernoulli Distribution represents a Bernoulli trial where there is either (S)uccess or (F)ailure.